My mind was wandering a tad more than usual when I spotted it, on the bookshelf behind my desk. Bright red, tall and thin, its treasures barely covered, remarkably tempting. One never to resist a good temptation, I picked it up, removed the clear plastic wrapping and gently thumbed through its delightful pages.

An American classic. It was not Moby Dick, The Sun Also Rises, The Adventures of Tom Sawyer, but rather, “Sun-Maid Raisins & Dried Fruits,” the 100th Anniversary marketing masterpiece that triggered memories of a wonderful project and a visit to an equally wonderful company.

It is obvious why the Central Valley is called “Great.” It dominates central California, 40 – 60 miles wide, 450 miles long nestled between the Sierra Nevada to the east, the Cascade Range and Klamath Mountains to the north, the Coast Range and San Francisco Bay to the west and the Tehachapi Mountains to the south, covering approximately 18,000 square miles, just about 11% of California’s total land area. It is divided into two smaller valleys: the Sacramento Valley in the north and the San Jaoquin Valley in the south.

The Central Valley is the fastest growing region in California with a current population of 6.5 million. The Valley is dissected by Interstate 5, Interstate 80, California State Route 99, the Sacramento River, the San Joaquin River and the Kings River.  A number of wonderful communities dot the Valley including Bakersfield, Chico, Clovis, Fresno, Modesto, Sacramento and Yuba City.

It is not only California’s most productive agricultural region, but also one of the most productive growing regions in the world, accounting for more than one-half of the fruits, vegetables and nuts grown in the United States. One of those fruits and vital to this blog is grapes, more specifically raisins dried from those grapes.

Raisins have been a mainstay of man’s diet for centuries. They are mentioned in several passages of the Bible including 1 Samuel 30:12, “And they gave him a piece of a cake of figs, and two clusters of raisins: and when he had eaten, his spirit came again to him: for he had eaten no bread, nor drunk any water, three days and three nights.” (King James Version). Turkey, Iran and Greece dominated the raisin industry until the United States became top dog in the 1900s, producing 24% of worldwide production in 2016.

That production is grown on approximately 200,000 acres, by 3,000 farmers, totaling  approximately 350,000 tons annually in the San Jaoquin Valley. The Thompson Seedless is the most popular raisin grape in the United States, dried in the sun, either on the vine or on the ground, on top of paper, to produce raisins. Two-thirds of annual production is consumed in the United States and Canada, the balance exported. The two most popular export markets are Japan and the United Kingdom.

Queen Isabella of Spain, best known for supporting and financing the 1492 voyage of Christopher Columbus, should be given a great deal of credit for the raisin industry in California. She sponsored missionaries to Mexico (including today’s California), opening missions up and down the Pacific Coast and growing grapes for sacramental wine and raisins. The industry bounced around the state a bit until if found a happy home in the San Joaquin Valley.

It wasn’t until the California Gold Rush of 1849, after many a prospector found little gold in “them thar hills,” but rather a fortune to be made growing raisins in the rich flat lands and abundant sunshine of the San Joaquin Valley, that the raisin boom really started to take shape. In an effort to rein in the craziness of a booming industry, a group of growers, as groups of growers often do, formed a grower owned cooperative, the California Associated Raisin Company in 1912. 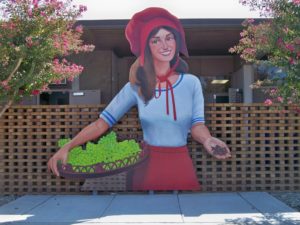 1915 was a pivotal year for the Co-op. The marketing people, one must watch out for the marketing people, came up with the name Sun-Maid and the nifty tag line, “The Best Raisins Under the Sun,” exhibited with much fanfare at the Panama-Pacific International Exposition in San Francisco, including dropping raisins from an airplane (litter laws were a little loose in those days) and discovered what would become one of the best known icons in the history of the packaged food industry…..the Sun-Maid Girl.

Better known to Mom and Dad as Lorraine Collett Petersen, who, according to legend and those pesky marketing people again, was discovered drying her black, curly hair wearing her mother’s red sunbonnet in the Fresno sunshine of her parent’s backyard. She presented the ideal Sun-Maid icon: attractive American girl with a pretty smile and a red sunbonnet that would become world-famous. In fact, Sun-Maid donated the bonnet to the Smithsonian Institution in 1987, commemorating the company’s 75th anniversary. San Francisco artist Fanny Scafford was commissioned to create a watercolor of Lorraine caressing a bowl of grapes that would, or its facsimile, adorn millions of Sun-Maid raisin boxes from that day to this.

Lorraine was born in Kansas City, MO in 1892. Her family eventually moved to Fresno where she attended high school and worked for the Griffin & Skelley Fruit Packing Company for $15 a week. In May, 1915 her world turned upside down when her discovery changed her employer, her career path and, I must assume, her paycheck. Now that she was famous as the raisin girl, the next logical course was to move south to the land of the silver screen.

Lorraine did actually land a small part in the movie The Trail of the Lonesome Pine, written and directed by Cecil B. DeMille, produced for an estimated $22,249, released on February 13, 1916. Her film career was cut short when her father convinced her that raisins and Fresno presented a better roadmap to fame and fortune than the movies and Hollywood, at least for Daddy’s little girl. She dabbled in the restaurant business for a couple of years, converted a former hospital into a nursing home and retired as a nurse. Although she died in 1983, buried in the Fresno Odd Fellows Cemetery, alongside her parents, her image lives on today and most likely forever, as the Sun-Maid Girl. 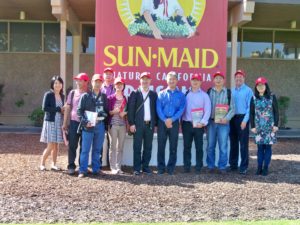 The people at Sun-Maid corporate headquarters in Kingsburg, CA (just outside Fresno) were most hospitable to my guests from Chengdu. They provided a wonderful tour of their processing facilities and an excellent business-to-business discussion in their corporate conference room including the presentation of a number of well received gifts, including the aforementioned, “Sun-Maid Raisins & Dried Fruits.” They do not participate in Industrial Tourism, except for a small gift shop containing a variety of Sun-Maid licensed products. This is a missed opportunity.

Sun-Maid has one of the best stories in the American food processing industry. They have created excellent marketing concepts and the ability to implement those concepts throughout their 100 year plus history. Food Tourism, possibly the anchor for an Themed Food Park,  seems like a logical next step.

If interested in a free digital copy of “Sun-Maid Raisins & Dried Fruits,” please go to www.sunmaid.com, click “Free Digital Download,” “100th Anniversary Book.” It will burn up a few pages of printing paper and a drop or two of overly priced ink, but if you are passionate about the history of the industry and one of the key players in that industry, the small cost is well worth it. After all, we are talking here about An American Classic.