08 Sep Every Community Needs One, Cashmere Had Two

Growing up in Mountlake Terrace, a suburb north of Seattle, a favorite family outing was to drive east on Highway 2, cross the Cascade Mountains over Stevens Pass to Wenatchee, WA, often during the Apple Blossom Festival. The 150-mile journey took two and one-half hours, crossing the great east-west divide that separates Washington State, two states in one with contrasting politics, landscapes and weather. My father used to say, “let’s go east and dry out!”

Dotting the landscape and tickling the funny bone were the Burma Shave signs, including such classics as, ‘PROPER, DISTANCE, TO HIM WAS BUNK, PULLED HIM OUT, OF SOME GUY’S TRUNK,” “WITHIN THIS VALE, OF TOIL, AND SIN, YOUR HEAD GROWS BALD, BUT NOT YOUR CHIN,” and “HE LIT A MATCH, TO CHECK GAS TANK, THAT’S WHY, THEY CALL HIM, SKINLESS FRANK.”

Challenging the Burma Shave signs in quantity, if not in verse, were the blue and white, “Tiny’s, Cashmere, WA” signs. As one might expect, Dick “Tiny” Graves wasn’t. He was a mountain of a man with his crew cut topping six feet three inches and his weight cracking 400 pounds. Physically huge, his legend might have been even larger.

Tiny’s Fruit Stand dominated the Highway 2 landscape, 24 hours a day, nine months a year, as a traveler passed Cashmere on the way to Wenatchee. In the 1950’s and 60’s it was one of the largest fruit stands in the nation. If was an awesome display of retail extravaganza: 300 feet long trimmed with a canvas awning, eight to ten-foot cutouts featuring milkshakes, hamburgers and apples attached to the roof along with waving flags and the largest neon sign in the Northwest at that time. White cars and trucks were painted with big red apples and the Tiny’s logo…..an apple with a derby wearing worm poking its head out.

Inside one could satisfy their appetite munching on gigantic hamburgers featuring a “special sauce” and double meat patties (sound familiar?) and a side of French fries, washing it all down with a soft drink or milkshake. Walking around on the sawdust floor, the senses were attacked by blaring country music, the smell of freshly popped popcorn and the sight of Tiny’s Apple Cider, Tiny’s Apple Syrup, freshly picked apples, cherries, plums, apricots and peaches, jams, jellies, honey, cookies, jewelry and souvenirs. Tiny’s had two of the three elements of Industrial Tourism: a restaurant and a gift shop. Since Tiny’s was a retailer, not a manufacturer, it lacked the primary element, the manufacturing tour.

Unfortunately, Tiny’s legend ended abruptly on December 1971 when he died at the young age of 41 of an aneurysm, while driving home from a Cashmere vs Chelan basketball game. His services were held at Central Christian Church in Wenatchee where his great-grandfather had been pastor with one of the stained-glass windows listing the family name. Although many associate Tiny with his masterful marketing and salesmanship, his bigger-than-life personality, his gigantic hamburgers and, of course, fresh and delicious fruit, many remember Tiny for his contribution in taking a small, Cashmere candy maker to the doors of the world.

In the early 1900’s two Armenian immigrants, Armen Tertsagian and Mark Balaban immigrated to the United States to seek the American Dream, meeting each other in Seattle, where they decided to start a business. Starting a business is one thing. Succeeding in a business is another. A yogurt factory and an Armenian restaurant both failed. Undeterred, they packed their bags and headed east to the Cashmere Valley, purchasing an apple orchard they named Liberty Orchards®, reflecting their new homeland. 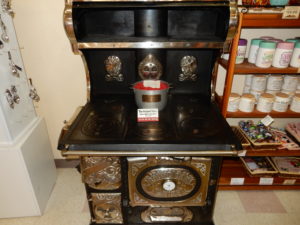 These two enterprising lads not only succeeded in growing apples, but developed a number of food manufacturing operations including Northwest Evaporation,specializing in dehydrated apples and a cannery named Wenatchee Valley Foods. Their breakthrough idea, the one that put them and Cashmere on center stage, came in 1920. They decided to manufacture Rahat Locoum, a confectionery they enjoyed back in the homeland. With a little experimenting on the kitchen stove they developed an apple and walnut candy, appropriately name Aplets® soon to be followed by a similar product made from apricots and walnuts, named Cotlets®.

The Liberty Orchards® candy venture was successful before Tiny came on the scene, but Tiny’s passion and commitment to the “home-made” candy was unequaled. Tiny created enormous 20 foot displays featuring box after box, in the hundreds, of Aplets® and Cotlets®. He is credited with developing the “sample program” that is so prominent in the company’s current marketing program, the concept of combining candy bars together (six Aplets® with six Cotlets®) and bulk packaging from product trimmings. Although this business marriage had its moments, as most marriages do, Tiny’s became the largest single retail outlet in the world for Aplets® and Cotlets®. Since visitors from around the world visited Tiny’s, they also purchased and spread the word about that delicious sweet treat from Cashmere, WA. 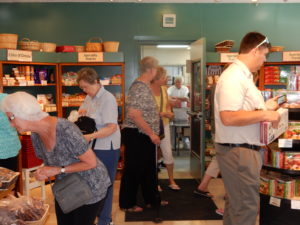 Liberty Orchards® is a good example of Food Tourism. They tour 80,000 visitors through their small production facility and even smaller gift shop. Piper, our perky and friendly tour guide, said the average purchase is $25.00 per person. That equals $2,000.000 in annual sales, with no broker commissions, distributor or retailer mark-ups and no packing or freight costs. Donna, my lovely wife, did her best to raise the average with two Popcorn Cobs®, three Orchard Bars®, one Cherry Almond Crunch Orchard Bar®, two Hawaiian Fruit Chocolates® and one SF Chocolate® for a total, with tax of $33.11.

There are continuous tours every 20 minutes of approximately ten people. The tour lasts 15 minutes, guided by a 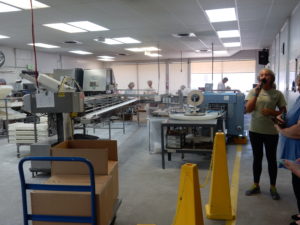 tour guide (remember Piper?). The visitors are guided through the cooking and mixing department and then the packaging department. They are separated from the workers and machinery by yellow construction cones chained together following a yellow line painted on the floor. Liberty Orchards® has successfully reached out to the tourism industry. During our visit Freedom Tours NW, Inc. was unloading approximately 60 passengers, the majority going on the tour, all of them purchasing Aplets® and Cotlets® and other assorted goodies. Visitors come from all over the world, with Canada, India and Europe the most popular countries of origin. I had the pleasure of speaking with a mother and daughter from Denmark who were having a delightful time.

They do a nice job converting those guests into long-term customers. There is a sign-up sheet in the gift shop to receive email promotions and a printed catalog. You can also sign-up on-line. I chose the latter and received a beautiful “HOLIDAY 2017 GIFT GUIDE FROM LIBERTY ORCHARDS” within a matter of days, including a “personal note” from Greg Taylor, President and a coupon worth up to $10.00. 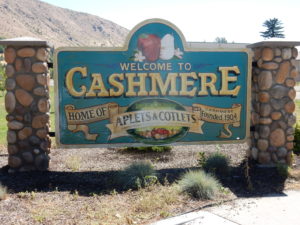 The company so dominates the community of Cashmere (population a little over 3,000) that one is welcomed by a sign proudly declaring that Cashmere is the “HOME OF APLETS® & COTLETS®.” In fact, two of the more traveled roads in Cashmere are Aplets® Way and Cotlets® Way. A good big fish in a small pond example or, more appropriately, a big nut in a small candy bar.

Liberty Orchards was P’Chelle International’s inspiration for Blue Mountain Station, an Themed Food Park in Dayton, WA. The concept is to take the Liberty Orchards® Food Tourism model and expand it from one to several small food and beverage processing companies, each providing individual tours of their facilities, a common gift shop and restaurant and aggressive data capture for digital and catalog marketing. I am proud to announce that Blue Mountain Station is doing well, even expanding!

Every community wants to be known for something, at least one thing that puts it on the map, that distinguishes it from the thousands of communities located throughout the United States. This can be especially challenging for a small community in remote Eastern Washington. Cashmere has been blessed. Of course, being located on Highway 2, having the beautiful Wenatchee River running through it and even having Wenatchee, the “Apple Capital of the World” a short 20 minute drive west are all viable assets, but not enough to get tourists to stop, investors to sniff around and writers to write. Cashmere had something more, Tiny’s and Liberty Orchards, two highly successful companies with iconic, globally recognized brands, attracting people to visit, spend and recommend. Every Community Needs One. Cashmere Had Two!