18 May The Little Ice Cream Company That Could 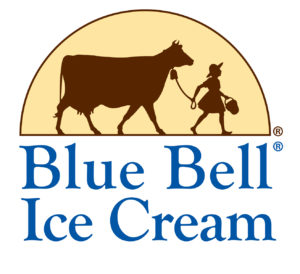 It was the summer of 1907 when members of the Brenham, Texas investment community wiped the sweat off their brows and stroked their chins, as smart and wealthy investors do, and determined they had the ingredients for a new industry. Local German, Polish and Czech farmers had herds of overly productive dairy cows, producing  a surplus of cream. With an investment of $2,200 ($55,766 in 2018 U.S. dollars) the Brenham Creamery Company was born, churning excess cream into Clover Leaf Butter.

Significant milestones were accomplished that proved to define the company’s future: the decision in 1911 to manufacture ice cream, development of a symbiotic relationship with the Agricultural and Mechanical College of Texas, today known as Texas A & M University, and hiring their first commissioned outside salesman. Significant? Yes. Profitable? Not enough for the money men who were considering shutting the business down. After 12 years and three managers their entrepreneurial zeal had turned sour. But, dreams die hard. Maybe hiring one last manager was the answer. They knew who that one last manager should be. April 1, 1919 was significant, not for honoring fools and their silly pranks, but for making the most important hire in company history!

Eddie Fritz “E.F.” Kruse was the son of an area farmer, a graduate of Southwest Texas State Normal College in San Marcos, Texas, a school teacher and World War I veteran. With his horned-rim glasses and dark, slicked-down hair, he had the bookish, but professional appearance of a bank manager, insurance agent or school teacher. Or, better yet, a school superintendent. In fact, when the Brenham Creamery job was offered, Kruse was also considering an offer to become superintendent of schools in Burton, Texas, 12 miles from Brenham. This might have been the logical choice considering Kruse’s background. 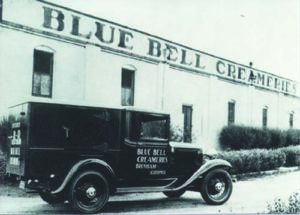 But, logic could not compete with the opportunity to manage a company close to his hometown of Prairie Hill, Texas, especially one that manufactured ice cream. Kruse accepted the challenge. He was a tireless worker, keeping a spartan schedule throughout his career. He worked from 7:30 a.m. until 6:00 p.m. six days a week plus two hours on Sunday morning before attending St. Paul’s Lutheran Church with his family, where he taught Sunday school. Kruse expanded the production facility, purchased additional equipment and replaced the company delivery horse with one of those “horseless carriages” better known as a Model T Ford. He refused to cash his paychecks for six months until cash flow turned positive.

As Kruse initiated a more professional and disciplined approach to running the company, not without a little employee discomfort, he not only started cashing his paychecks, but started investing in the company, eventually becoming the second-largest shareholder. This and inherited talent explains the almost 100-year tenure of a Kruse in top management.

In 1930, at E.F. Kruse’s recommendation, the company name was changed to Blue Bell Creameries, after the native Texas wildflower, reflecting their on-going expansion. An interesting innovation during the Great Depression were the Lotta Cream stores, selling ice cream by the cone, a relatively novel concept, at the time.  Double-dip ice cream cones sold for 5 cents each. Stores, located within businesses, were soon established in the neighboring communities of Elgin, Smithville, Giddings, Taylor, La Grange, Navasota and Bastrop.

On October 21, 1951, Eddie Fritz “E.F.” Kruse died at the age of 56, following cancer surgery. His oldest son, Ed. F. Kruse at 23 years old (the same age as his father when he took the reins of the company, became manager, secretary and treasurer.

The 1950s said good-bye to the struggles of the Great Depression and World War II. It was a new era, a new prosperity. Consumerism ran full throttle. People had jobs and were spending money like never before on cars, houses and appliances. And most important to Blue Bell , they were buying refrigerators with freezer compartments. Not confined to the local ice cream parlor or soda shop, mom could now stock the freezer with delicious Blue Bell Ice Cream, conveniently packaged in pint and half-gallon containers. Obviously, a revolution in the food industry was taking place and Blue Bell was one of its beneficiaries.

In 1958 the company discontinued making butter. Ice Cream was the future and that’s where the cream and investment dollars belonged. Ed. Kruse also realized the future belonged outside the circle of small communities surrounding Brenham. If the company was going to survive, much less prosper, they would need to look 74 miles southwest on US-290 W. Houston was the future! But Houston was also where the big boys played: Carnation, Borden, Lilly, Swift and Foremost Dairies. Ed. Kruse believed he had a secret weapon, actually three secret weapons: 1) Better Quality 2) Better Service and 3) Small Town Values. But to conquer Houston, Blue Bell needed a general

Ed. Kruse wanted his general to be John W. Barnhill, Jr. He was the logical choice. He was raised in Brenham. His father sold Blue Bell products in his Barnhill’s Drugstores and sat on Blue Bell’s board of directors. John W. Barnhill, Jr. worked at Blue Bell as a youngster. He knew the company, the culture and the people. He was smart and hard-working and…..he lived in Houston, working for the Houston Press!

Barnhill, Jr. accepted the position, although it took a little persuading to convince him that ice cream offered a sweeter future than journalism. In 1960 he began the grinding process of building a market, beginning with a handful of mom & pop grocery stores on the outskirts of town, gradually working his way into the heart of the city and the major retailers, handing out samples to whoever was interested and would listen to his down-home sales pitch.

He communicated with friends and relatives of Brenham residents living in Houston, letting them know where Blue Bell was currently being stocked and encouraged them to buy and, what the heck, buy some more. He even sold Blue Bell ice cream from the back of a motor scooter, in the evenings after work, up and down the Houston streets. John W. Barnhill, Jr. was building the market one consumer, one retailer at a time.

A smart marketing move was the purchase of vending machines from the Sun-Up Ice Cream Company and South Texas Vendors. Filled with Blue Bell products and located in offices throughout Houston, they not only sold products, but also created customer awareness and demand at their favorite grocery store. John W. Barnhill, Jr. rapidly rose through the ranks: Houston Branch Manager, General Sales Manager and, finally, Vice President of Sales and Marketing. He is responsible for Blue Bell’s dominance, not only in Texas, but throughout the mid-west and southeast.

The fame and fortune of Lyle Metzdorf grew in tandem with Blue Bell’s. Having grown up in Independence, Missouri, attending Central College in Fayette, Missouri and the Kansas City Art Institute and School of Design, he understood Mid-American values.

He also understood how to create a brand, in this case the Blue Bell brand. A bowl of ice cream became more than cream, sugar and flavorings. It reflected a day along the river with your favorite dog, fishing with an old rod, rusted reel and red and white bobber; eating Mom’s homemade apple pie; welcoming the robins in the Spring; driving your first car; say grace before each meal; red barns, white fences, blue skies and a little girl with a bucket in one had and a rope attached to a Jersey cow following behind in the other.

Brenham wasn’t just a small town in east-central Texas. It was now that forgotten place in you mind where the “Good Ole Days” could be visited, if only for a few minutes while eating ice cream. Real or imagined, it didn’t matter. It sold ice cream! 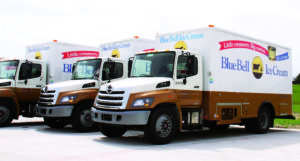 Lyle Metzdorf was a creative genius. Many give him credit for taking a small, local ice cream brand and transforming it into a dominant regional brand, at one time ranking #3 in national sales. For 33 years he worked with Blue Bell: writing, designing, producing and directing award winning television and radio television and radio commercials, films, print ads, billboards and packaging. He is responsible for the popular slogan, “We eat all we can and sell the rest.” Unfortunately, like many possessing an unusual mind, he died an unusual death.

On February 18, 2002 Metzdorf died of smoke inhalation in a fire aboard his 52-foot luxury sailboat, the Matisse. He was sailing the East Coast of the United States, mooring his boat in the Charleston Harbor Marina while visiting his son, Lance. He was 67 years old.

Blue Bell eventually became the number-one-selling ice cream brand in Houston, then Austin and  Beaumont. In 1978, with encouragement from the likes of Kroger, Blue Bell entered “Big D.” Lyle Metzdorf dressed models in milkmaid costumes and had them deliver ice cream samples to 100 plus media personalities and writers in the greater Dallas area. The word spread and so did the sales.

When Blue Bell celebrated its centennial in 2007, the company could proudly boast of 3,000 employees, 45 branches, 900 wholesale routes, 1,500 delivery trucks, 60,000 cows supplying milk daily, 267 products sold in 16 southeastern, southwestern and mid-western states with a dabbling of international sales in Mexico, Qatar, Saudi Arabia and the United Arab Emirates.  The future looked bright, until…..

April, 2015. Blue Bell issued its first recall in its 108-year history because of a Listeriosis outbreak in a number of its manufacturing facilities. Ten people became ill. Three of them died. All products were recalled. All production facilities were closed, inspected, cleaned, and sanitized. Approximately 2,500 employees were furloughed or laid off. It was an ironic twist of fate. From the beginning, clean production facilities had been a hallmark of the company. Apparently, not clean enough. By July it was estimated that Blue Bell had lost approximately $130 million with no stop in sight. The future looked bleak. As in 1919, they needed a savior.

In 1919, it was E.F. Kruse. In 2015 it was Fort Worth billionaire Sid Bass of Bass Operating Co., Inc., investing up to $125 million, acquiring one-third of the company in the process. On August 31, 2015, with manufacturing facilities given the green light, finances secured and ice cream again being manufactured, Blue Bell began a methodical product roll-out to welcoming customers state-by-state. Blue Bell was back in business! 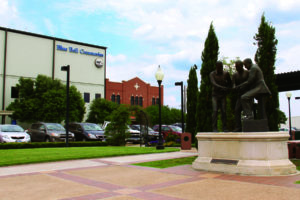 A tragic episode that could have resulted in the death of one of the iconic brands of American food history instead highlighted the touch of providence that provided the “right man at the right time,” a belief in the men and women who devoted their lives to making the best ice cream in the world, small town values, tremendous brand loyalty and continued success for The Little Ice Cream Company That Could.