She was standing before me at McCarron International Airport, Las Vegas.

I was  hired by the USDA to organize an in-bound trade mission starting with attendance at the International Baking Industry Exposition in Las Vegas, followed by meetings with industry buyers in California. I had communicated with Jo Jo extensively by email and occasionally telephone. We had never met. After pleasantries and loading baggage onto the airport shuttle, before heading to the Riviera Hotel & Casino, Jo Jo shocked me with a surprising request. “Gary, can we visit an In-N-Out Burger?” My mind was shouting “what?” Fortunately, my mouth responded with, “I’ll see what I can do.”

In-N-Out Burger, overshadowed by McDonald’s, Burger King, KFC and other international fast food chains raises its head with pride as one of the most iconic fast food chains in the world. It has a cult-like following, including Hollywood celebrities, beyond the physical location of its stores. In-N-Out is a product of its time and place.

The 1940s and 50s marked an unprecedented change in the American restaurant business. After World War II, returning GI’s were going to college, getting jobs, starting businesses and families. The Federal Highway Aid Highway Act of 1956, signed by President Dwight D. Eisenhower, inspired by Ike’s observation of Germany’s autobahn, pumped $114 billion dollars into the U.S. economy. The resulting Interstate Highway System connected the country coast-to-coast, creating America’s automobile culture. This was especially true in Southern California, where “cool cars” not only dotted the landscape, but also “cool restaurants” to accommodate their passengers. Southern California was the birthplace of the fast food industry! 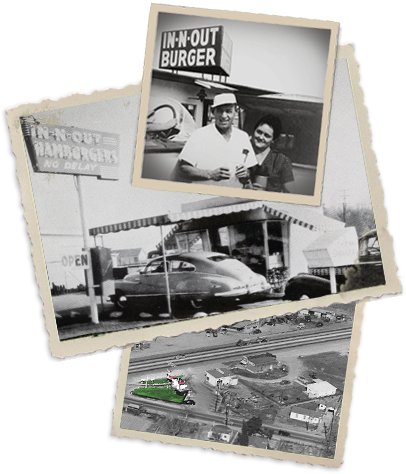 In-N-Out Burger was the creation of Harry and Esther Snyder. Harry worked as a caterer selling boxed sandwiches to the cafeteria at Fort Lawton, Seattle. Harry was smitten with the cafeteria’s manager – Esther. Harry was a dreamer and entrepreneur. He had an idea for a new type of restaurant. Esther loved the idea and, eventually, loved Harry. Love led to marriage and migration to the land of magic and opportunity, post-war Southern California.

Harry’s restaurant idea revolved around Southern California’s love of cars, love of hamburgers and insatiable desire for speedy service and convenience. Harry would open a “drive-through” restaurant providing quality food, a simple menu, low prices, a clean facility and quick service to the greater and growing Los Angeles car culture. According to legend, Harry invented the “first two-way speakerphone drive-through system.” No indoor seating. No car hops. In and Out! On October 22, 1948 In-N-Out Burger #1 was opened at the corner of Francisquito and Garvey in Baldwin Park, a growing suburb 17 miles east of Los Angeles. As they say, “the rest is history.” But history took an unexpected, and frightening, turn.

Harry Snyder’s 30-year Chesterfield habit, hip as a young man, was now regretted. Harry died of lung cancer on December 14, 1976 at 63. At the time of his death Harry’s one store in Baldwin Park had grown to 18 stores spread through-out the San Gabriel and San Fernando valleys and Orange County. The burning question was who was going to succeed Harry. The decision boiled down to Harry and Esther’s two sons: Guy, the first born, and his younger brother Rich. Tradition pointed in one direction. Common sense, the other. 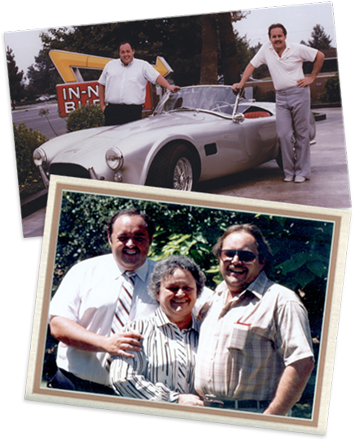 Harry “Guy” Snyder, born on February 22, 1951, was “James Dean, a rebel without a cause.” Rules were made to-be-broken,  authority ignored. Even though a prince in a hamburger kingdom, his passion was far from grilled meat patties and toasted buns. That was for another member of the royal family. Guy spent tine on his 170 acre Flying Dutchman Ranch, named in honor of his father’s Dutch heritage, located on the northern ridge of the Sacramento Valley. He enjoyed the comfort of nature, riding his Caterpillar tractor, tilling the soil, shooting his pistols. He fished in Alaska and hunted in Montana. He enjoyed being with his friends, although the number depended on the generosity of his wallet.

During his teenage years he embraced the anti-establishment anthem of the 1960s: sex, drugs and rock n roll. Guy added a passion for speed: cars, dragsters and motorcycles. He pushed the limits. In the mid-1970s the limits pushed back. While racing his motorcycle on the Algodones Dunes, 50 miles northwest of Yuma, in the shadow of the Chocolate Mountains, Guy lost control in the soft sand. His motorcycle landed on top, Guy crushingly on the bottom. He severely injured his back and right arm, requiring on-going surgery and therapy. He developed a life-long dependency on painkillers. His life became a cycle of drug overdoses, emergency hospital visits, rehab, constant pain and continual regret.

Guy tried domestic life, not once, but twice. In 1981, he married Lynda Lou Perkins, a divorced mother of two, who worked in a T-shirt shop in Hermosa Beach. On May 5, 1982 Lynda gave birth to Lynsi Lavella Snyder, Esther Snyder’s only grandchild. On January 23, 1997 Guy and Lynda finalized their divorce. On September 28, 1997 Guy married Kathy Touché, a divorced mother of three who worked at Norm’s Hanger, her father’s restaurant, at Brackett Field in La Verne. On May 18, 1999 Guy filed for divorce from Kathy. Both wives had signed pre-nuptial agreements. 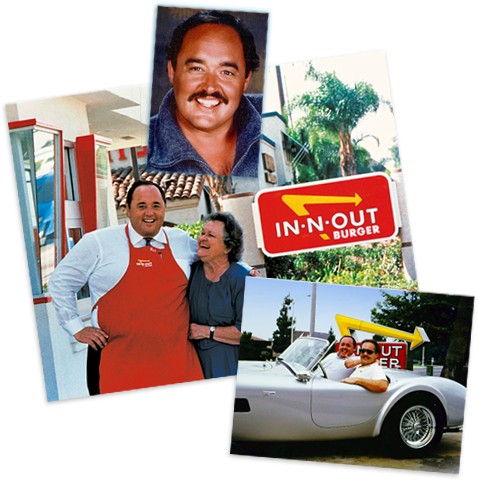 Richard “Rich” Allen Snyder, born on July 13, 1952, was the antithesis of Guy. If Guy was James Dean, Rich was Ward Cleaver. He embraced home, country and faith. While Guy was skipping classes at Bonita High School and cruising in hot cars with his buddies, Rich was attending classes, playing varsity football and participating in the Rocket Club. He was strait-laced, parent’s favorite, dependable, natural entrepreneur, hard worker, charismatic and passionate about In-N-Out Burger. At 17 he became the company bookkeeper. At 24 the president.

When Harry died there was no debate over the company’s next president. Rich, the youngest son, was chosen. Guy, the oldest son, was not. Guy was named In-N-Out Burger’s vice president. His primary responsibility was the meat department and warehouse at the Baldwin Park headquarters. His commitment was minimal. His participation less so. Guy’s attitude towards his work reflected his attitude towards his brother.

“An offended brother is more unyielding than a fortified city, and disputes are like the barred gates of a citadel.” Proverbs 18:19 NIV

Rich was a visionary and doer. His first big test came on August 6, 1978 when the Baldwin Park headquarters, including the offices, meat department and warehouse were decimated by fire. Improvising as best he could, company operations barely skipped a beat. By 1981 an entirely new, and improved, facility was built and operating. Rich, while maintaining the company’s core values of “Quality, Cleanliness, and Service, had a vision of growth that far exceeded his father’s.

Harry was happy with slow expansion, one or two stores per year, limited to greater Los Angeles County. Rich wanted 10 – 12 stores per year, limited only by his ambition. To build his empire, Rich needed organization, so he created departments: human resources, financial, advertising and real estate development. Rich needed trained, professional management, so he created In-N-Out University. To educate and inform associates (employees) he created In-N-Out’s Burger Television and a company newsletter, The Bulletin. To retain employees In-N-Out provided salaries and benefits beyond the industry average.

In 1983 Rich made the most profound decision in his life. He became a born-again Christian. He started faithfully attending Pastor Chuck Smith’s Calvary Chapel Costa Mesa (CCCM) in Orange County. Starting with 12 people meeting in a trailer park’s recreation room in 1961, CCCM became best known as the heart and soul of the Jesus Movement in the 1960s. Thousands of “hippies, freaks, flower children” were migrating to Costa Mesa to “turn on, tune in, drop out,” replacing Timothy Leary’s LSD with Jesus Christ’s message of salvation and eternal life. Rich shared his faith, printing Bible verses on the company’s cups and burger wrappers.

To ensure the company continued to be controlled by blood descendants of Harry and Esther, the family created the Esther L. Snyder Trust on January 31, 1989. Rich received approximately 90% of the Trust’s shares and Guy approximately 10%. The shares were to be distributed in 1996 or when Esther died.

As with most things, domestic life proved more favorable for Rich than Guy. On May 2, 1992, Rich, at 39, married 26-year old Christina Bradley, a sales associate at a Newport Beach equipment leasing company, who had a young daughter. The nuptials were performed at the Grand Wailea Resort in Maui, Hawaii. Rich flew in, at his own expense, 82 family and friends. Noticeably absent was Guy.

On December 15, 1993 Rich participated in the grand opening of Store #93 in Fresno. On the return flight, approaching John Wayne Airport their chartered flight became embroiled in the wake turbulence of a Boeing 757. The charter pilots lost control, crashing into the Santa Anna Auto Mall. Rich Snyder, at 41, was dead!

During his 17 years as president, Rich had grown In-N-Out Burger from 18 to 93 stores throughout Southern California and Nevada. Rich had proven to be an extremely successful president. Guy was the uncomfortable successor. He was named chairman. More importantly, he gained control of the Esther L. Snyder Trust.

Rich had developed a management structure that allowed the company to run smoothly with little supervision from the top. Successful store openings continued and Hamburger University provided the people to manage those stores. Guy took Rich’s office, but never took his place. The company continued to grow while he continued to struggle with drugs.

On December 4, 1999, while watching television with friends, Guy stopped breathing. Paramedics were called. At 12:32 AM, at Antelope Valley Hospital, Lancaster, California, Guy Snyder, at 48, was pronounced dead! The cause of Guy’s death was later determined to be an overdose of hydrocodone, a prescription painkiller.

When Guy died his daughter, Lynsi Snyder, was a 17-year old high school student. Eventually she would inherit and manage the company. In 2010, at 28, Lynsi was named president. In 2012, at 30, she inherited 50% of the shares and in 2017, at 35, the balance. Lynsi also inherited Guy’s demons…drug abuse and failed marriages. But, with the grace of God, she has managed to overcome both.

In Irvine, California, Jo Jo Shen’s request was granted. We made a special visit to an In-N-Out Burger. Great food. Great experience. We owe that experience to the Snyders: Harry and Esther who pioneered the concept; Rich who gave it professional structure; Guy who was wise enough not to tinker with a winning formula; Lynsi who kept the ball rolling and the empire growing; All the Snyders who resisted the temptation to franchise or go public. Today In-N-Out has 347 stores in six states and the brand rests warmly in the hearts of thousands around the world, even in Chengdu, China. 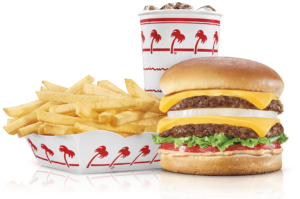 In-N-Out Burger, A Behind-the-Counter Look at the Fast-Food Chain That Breaks All the Rules, Stacy Perman