16 Nov The Father of Eatertainment

Sometimes the best concepts walk in through the back door and eventually take over the house. Such was the case with Dan Evins in the late 1960s. Evins faced a growing problem. He worked for Consolidated Oil, the family gasoline distribution business founded by his grandfather. The company’s market was small, rural Shell gasoline stations. More people were buying and driving cars than ever before. This should have been good news for Evins.  Unfortunately, they were taking advantage of the rapidly expanding Interstate Highway System, bypassing once busy rural roads and the gas stations that serviced them.

Up to that time his employment depended on family. After three years in the Marine Corps he worked as an aide to his uncle, U.S. Representative Joseph L. Evins, Fourth Congressional District, Tennessee, considered one of the most influential men in Washington D.C. He then went to work as a teller in his brother’s bank. Now he was working for the family oil business, not striking it rich with a forest of oil derricks pumping black gold, but listening to depressed rural gas station managers singing the blues, wondering “what to do.” 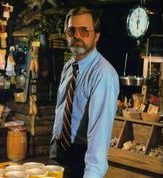 Evins knew what to do, at least for him. Break the mold, create a new concept in a business he was familiar with. He was going to open a gas station. A gas station that was different. It wasn’t going to be in rural America, but it was going to be of rural America, incorporating its charms, beauty, romance and fantasy. Evins borrowed $40,000 and opened a Shell gas station on Highway 109 in Lebanon, Tennessee. To be different from his competitors he added a restaurant and gift shop.

A restaurant on an interstate highway was not a novelty. McDonald’s, Wendy’s, Burger King, Taco Bell, Taco Time, KFC, Jack In The Box and an army of others had prospered satisfying the stomachs of hungry travelers crisscrossing America’s freeways. They were fast and cheap, with simple menus and indifferent employees. Evins’ restaurant would be the opposite. It would be “country style” with Southern hospitality, away from the sterile, almost carnival like designs of shiny metal, concrete, plastic and neon to barnwood siding, wooden porches, rocking chairs, rustic wood fences, buckboard wagons, rock fireplaces and employees that said, “Ya’ll come back now, ya hear?” 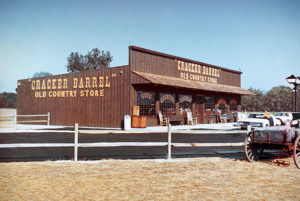 The menu was different, not focused on the fast food fare of hamburgers, hotdogs, French fries, milkshakes and soft drinks. Noooo, this was the kind of food Mama makes, Southern style. We’re talking fried catfish, buttermilk biscuits, chicken pot pies, fried chicken livers, turnip greens, sweet tea, baked sweet potatoes, cornbread dressing, hickory smoked country ham and fruit cobbler with “all the fixins,” much of it made-from-scratch. Now, those are some grits (yes, they serve those too).

The gift shop contained what every Southern country home deemed absolutely necessary from rocking chairs, women’s clothing, folksy home decorating accessories, cook books, quilts and bedding, to, eventually, private labeled food products. It was the place for people to meet, “break bread,” buy supplies, talk about the weather, politics, religion and share family memories. In years gone by such a place would be called a country store. Where people met, talked and played checkers was around an old empty cracker barrel. Consequently, Evins named his new enterprise the Cracker Barrel Old Country Store. He had a concept that was different. Would it work?

The answer was a resounding yes! Cracker Barrel was in the black within the first 30 days of operation. This was not entirely surprising. Most restaurants do well initially, folks checking out the “new place in town.” For long term success, the entire package must work: theme, location, service, and most important, the menu and food quality. Cracker Barrel received straight A’s across the board. Within eight years Cracker Barrel dotted the Interstate Highway System with 13 stores from Tennessee to Kentucky to Georgia. In 1981 the company went public to secure funds for expansion. And expand they did. By 2000 there were 420 locations. Today there are 663 restaurants in 45 states. This is impressive growth, especially considering these are all company owned stores, no franchises. With the 1970’s oil embargo and the realization that their future was with the restaurants and gift shops Cracker Barrel started phasing out gasoline sales. Even though Grandpa Evins and his Consolidated Oil might be disappointed, Cracker Barrel was no longer in the gas station business.

Cracker Barrel’s success is based on authenticity: real Southern country food served with real Southern country service in a real Southern country atmosphere. That atmosphere doesn’t just happen. It happens with people who understand the theme and how to capture it. Evins knew just the right people, reaching out to Don and Kathleen Singleton, owners of Spider Web Antiques in Lebanon. Talk about being in the right place at the right time! What became a one store project rapidly developed into a career, decorating up to 50 Cracker Barrel stores per year. To accommodate the demand, the Singleton’s needed to expand the inventory. Initially they stored excess inventory in Grandpa and Grandma Singleton’s bedroom, apparently not being used and very large. As one would expect, no matter how large the bedroom, it eventually proved inadequate.

The answer was the 26,000 square foot Cracker Barrel Décor Warehouse located on the company’s 98-acre headquarters campus in Lebanon, Tennessee. Today that warehouse holds approximately 90,000 pieces of authentic Americana, with another 700,000 pieces in stores throughout the United States. Each store displays an average of 1,000 pieces. Once items are sourced and arrive at the warehouse they are cleaned, restored, barcoded and cataloged. It may not be as comfy as grandpa and grandma’s bedroom, but it is a great deal more efficient. 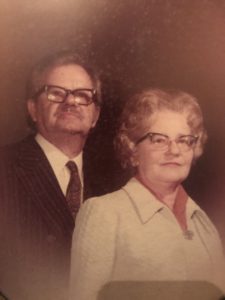 A mock-up is made for each new store, what item goes where, with a slight nod to the culture and history of that store’s community, providing a museum-like quality. No matter where it is located there are four items that decorate every single Cracker Barrel store: 1) a horseshoe above the front door 2) an ox yoke next to the horseshoe 3) traffic lights above the bathroom doors and 4) a barrel, most likely a cracker barrel, with a checker board in front of the fireplace.

The decorating items cover the whole gamut of antique store décor, including tin food and beverage containers, advertising memorabilia, signage, tools, photographs (“I’m sure that’s Uncle Harry!”), toys, and much, much more. These items are sourced through antique dealers, antique shows, liquidation sales, auctions and flea markets, eventually through a network of trusted suppliers. Because they have the capacity and desire to purchase in bulk, many suppliers today contact them directly, especially when they have a “hot deal.” It is estimated that Cracker Barrel has sourced over one million pieces. That’s a lot of antiques, especially for someone in the restaurant business. 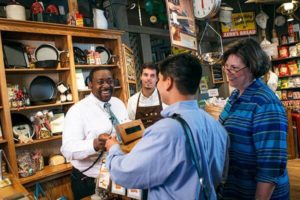 If you’ve wondered where some of your favorite candy treats disappeared to, you might want to visit a Cracker Barrel gift shop. They pride themselves on a wide variety of nostalgic and classic candy products, such as: Goetze’s Vanilla Cow Tales (chewy caramel with a cream center), Wonka’s Bottle Caps (featuring the sweet and tart taste of soda pop in bottle cap shaped wafers), and Fralinger’s Original Salt Water Taffy in a collectable gift box (originally created by Joseph Fralinger in 1885 and sold in his candy store on the Atlantic City Boardwalk).

To give you an idea of quantities, Cracker Barrel sells 70,000 rocking chairs per year (their number one item), 3.7 million pieces of women’s apparel and 300,000 peg games (the popular game on each table to entertain one and all waiting to be served). Products are also available on line at www.crackerbarrel.com. Many of their food products, sold under the Cracker Barrel Old Country Store label, such as, “Buttermilk Baking and Pancake Mix,” “Black Forest Ham Deli Meat,” and “Oven Roasted Turkey Breast Deli Pre-sliced Meat” can also be found at your local supermarket. At the top of really cool marketing ideas is their entry into the music industry, country music, of course.

With Lebanon only 31 miles west of Nashville, the home of the Grand Ole Opry House, the Country Music Hall of Fame and Museum and the famous Ryman Auditorium, it only made sense for Cracker Barrel to introduce a unique, especially for a restaurant company, music marketing program. It doesn’t hurt that Dan Evins was personal friends with country music legend Chet Atkins and that Evin’s brother was a member of the Grand Ole Opry house band. Antique musical instruments and sheet music decorate many a Cracker Barrel wall. In the early days it wasn’t unusual to see and hear local musicians gathered on a Cracker Barrel front porch strumming their guitars and singing of lost loves and fortunes never found.

In the 1990’s Cracker Barrel started selling compact discs in their stores. In 2005 they produced their first exclusive CD with Alison Kraus and Union Station. They grew from there, producing five to seven albums a year with different artists. In 2012 Cracker Barrel partnered with Dolly Parton to produce a two-disc album titled, “An Evening with…..Dolly Live,” certified gold by the Recording Industry Association of America. If available, Cracker Barrel sells product lines of the artists they partner with.

In 2020 Cracker Barrel and Sony Music Nashville teamed up to produce, “There’s Comfort In Giving,” a program that donated over 15,000 meals to medical staffs on the frontlines of COVID-19. This number far exceeded their goal of 10,000. For every Cracker Barrel $10 e-gift purchased on the company’s website, Cracker Barrel donated one additional meal to healthcare professionals. Several Sony Music Nashville artists hosted live performances on their social media channels promoting the program. Each artist chose their hospital of choice to receive the meal donations. Combined, the artists’ livestreams created over 1.6 million views.

Cracker Barrel started in 1969 as a gas station that just happened to have a restaurant and gift shop. The restaurant and gift shop walked in through the back door and took over the house. Dan Evins understood eatertainment before the term was invented, before the Rain Forest and Hardrock Cafés. Cracker Barrel was picking American before the History Channel debuted American Pickers on January 18, 2010. They understood how a successful gift shop and music production operation could increase profits and reinforce the brand. Most important of all, Dan Evins understood a simple Southern saying, “stick to your nittin.” Cracker Barrel did just that and created one of the most successful examples of eatertainment known in this land or any other.