One hundred years is a long time. Few people reach the century mark. Even fewer businesses, especially fast-food restaurants. A tip-of-the-hat to the first to do it…A&W Restaurants.

Roy W. Allen opened his first root beer stand at Lodi, California on June 20, 1919. White Castle was close, opening in Wichita, Kansas on March 10, 1921. But close doesn’t win the prize. Even further behind are the industry giants. McDonald’s was founded on April 15, 1955 in San Bernardino, California, Burger King is a little closer to the champ, but barely, having started-up in Jacksonville, Florida on January 23, 1953. Wendy’s can barely see A&W’s dust, flipping its  first burger on November 15, 1969 in Columbus, Ohio.

It was an interesting year to be opening a root beer stand. On June 28, 1919 the carnage of World War I was officially ended with the Treaty of Versailles, although never ratified by the United States Senate. In practical terms, the fighting ended when Germany and the Allies agreed to an armistice on November 11, 1918. We can thank the Treaty of Versailles for ending one of the greatest conflicts in world history, accounting for 8.5 million combatants and 13 million civilians losing their lives, but also planting the seeds for a horror of significantly greater proportions twenty years hence.

Roy Allen was obviously a patriot, an opportunist, or both. This first stand, temporary to test his new product, was set up on West Pine Street, jutting out into the street past the crowd, during the welcoming home parade honoring Lodi’s World War I veterans. It was a hot June, Central California day. A 10-ounce, five cent frosty mug of thick and creamy root beer quenched a person’s thirst in a most delightful way. A second mug could quench it even better. Allen must have enjoyed the warm embrace of success, which would only get warmer. But where did this hotelier, originally from Illinois, come up with the idea for a new root beer beverage?

In 1918 Roy Allen was operating a hotel in Flagstaff, Arizona. There he struck up a conversation with a retired pharmacist who had formulated a tasty and wholesome root beer concocted of herbs, bark, spices, and berries. Allen, with an entrepreneurial mind looking for a place to land, thought he found it and purchased the formula for this new beverage. The formula is still a guarded secret in the tradition of Colonel Harland Sanders’ “original secret recipe of 11 herbs and spices.” Allen eventually said good-bye to Flagstaff and with wife Alice and daughter Louise and a crumpled piece of paper with a “magic formula” scribbled on it headed west to Lodi.

Allen may have been a visionary or just plain lucky. On October 28, 1919 the United States Congress passed the Volstead Act, over President Woodrow Wilson’s veto. Prohibition went into effect on January 17, 1920 as spelled out in the 18th Amendment to the United States Constitution. Alcoholic beverages were now illegal. Prohibition was not only a blessing to organized crime, but also to the sales of root beer, considered by some a viable substitute. With the Lodi store a rip-roaring success, Allen made his temporary stand a permanent building. It was also time to expand to a larger market. The population of Lodi was a tad under 7,500 people. Approximately 50 miles north was Sacramento with a population a tad over 45,000 people. 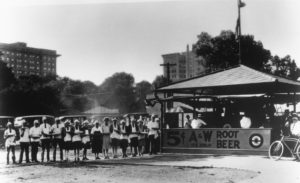 In 1922 Allen decided to take the plunge, opening a Sacramento store with former Lodi  employee and newly minted partner Frank Wright and thus the name, A&W Root Beer, “A” for Allen  and “W” for Wright. With curb side service featuring carhops, this facility is considered  America’s first “drive-in restaurant.” Roy Allen was creating history in the restaurant business. Twenty-three years later, down south in San Bernardino, California, two brothers, Richard and Maurice McDonald, eliminated carhops, streamlining their drive-in operation, creating a little history of their own. Allen and Wright must have had great confidence in the long-term viability of their partnership. Silly men! Successful partnerships are a rarity. This one was no exception. In 1924, Allen bought out Frank Wright. In 1925, with Wright out of the picture, Allen stepped on the gas by selling A&W Root Beer franchises. A&W is considered the first franchise restaurant chain in the United States. The business expanded, three units in Sacramento, then throughout central and northern California and into Texas and Utah. By 1933 A&W Root Beer had over 170 restaurants. 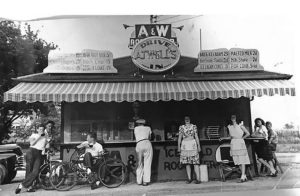 Allen’s original franchising model was much simpler than what we see today. It started with Allen selling A&W Root Beer concentrate exclusively to franchises, most likely with the use of the brand name on signage and marketing materials. This approach would be similar to Kentucky Fried Chicken initially selling their chicken batter mix containing the “original recipe of 11 herbs and spices,” starting in Salt Lake City, Utah in 1952. Both companies left it up to the individual restaurants to provide the balance of the menu items. Over time, as the two brands gained a significant following, they developed additional food and beverage offerings, standardized building and interior designs, all in line with a focused management and marketing approach. Both companies were pioneers in developing the modern franchised fast-food industry. 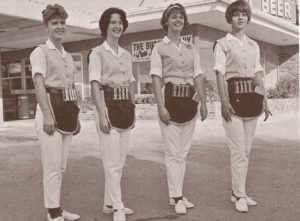 Most A&W franchises survived the Great Depression and the Second World War despite all of  their challenges. A&W shared in the booming post-World War II economy. More Americans were buying cars and traveling on the newly built freeways, all looking for a convenient place to eat. They were also looking for a brand name they could trust. In 1950 A&W had nearly 450 restaurants dotting the landscape nationwide. That same year Roy Allen decided to hang up his apron, cash in, and retire. Allen sold the company to Nebraskan businessman Leonard Eugene (Gene) Hurtz, who took advantage of the growing prosperity and demand for investment opportunities in the fast-food industry. In 1956 A&W opened its first foreign store in Winnipeg, Manitoba, Canada, followed, over time, by Guam, the Philippines, Malaysia, Thailand, Japan, Singapore, and Bangladesh. By 1960 the company had over 2,000 restaurants.

In 1963 Hurtz sold A&W, now the largest fast-food drive-in chain in the world, to the J. Hungerford Smith Company, who had been manufacturing A&W Root Beer concentrate since 1921. In 1966 the J. Hungerford Smith Company was purchased by the United Fruit Company. In 1970 United Fruit was acquired by the AMK Corporation, who formed the United Brands Company. In 1971 United Brands, capitalizing on the success of A&W Root Beer, launched A&W Beverages, Inc., distributing their popular beverages in bottles and cans to retail establishments, initially in Arizona and California, eventually nationwide. In 2018 A&W Beverages became part of multi-billion-dollar Keurig Dr Pepper.

When founder Roy W. Allen sold A&W to Gene Hurtz in 1950 there were 450 restaurants. Ten years later Hurtz had built the company to 2,000 units. In 1974, under the management of United Brands, growth capped at 2,400 restaurants. When A&W celebrated its centennial birthday on June 20, 2019 A&W had 1,000 units worldwide. What happened? A. Alfred Taubman, Sagittarius Acquisitions, Yorkshire Global Restaurants, and Tricon Global Restaurants/Yum! Brands is what happened.

Too many owners with different competencies and visions practically destroyed one of the most iconic brands in the restaurant industry. Fortunately, A&W had created too many memories to be forgotten. My memories were summer afternoons with my buddies in my two-door 1956 Chevy, metallic silver exterior, black interior, the radio blaring rock ‘n’ roll hits, a glass pack muffler that was the envy of the guys and scourge of the police. Throw in a Papa Burger, side order of fries, and a frosted mug of the most delicious frothy root beer on the planet, served by a young lady with a friendly smile, cheerful patter, and snappy uniform and youth is forever captured. The ownership merry-go-around ended in 2011 when Yum! Brands sold A&W Restaurants to A Great American Brand, a consortium of American and foreign A&W franchisees. For this group of franchisee-owners A&W was not part of their portfolio, it was their portfolio. It was time to re-evaluate and navigate a new course. 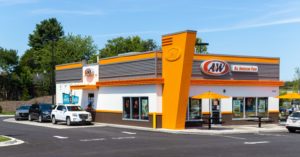 They initiated a quality over quantity initiative, going back to their roots, if you will, beginning with the heart-and-soul of the brand, the root beer. The restaurants are again making it daily from the original recipe. They shifted from co-branded (KFC, Long John Silver’s) to stand-alone, single-branded stores, with the emphasis on drive-through, a huge benefit in the age of COVID-19. They are focusing on locating restaurants in small, rural communities with populations of 7,000 – 10,000, with less competition, lower real estate costs, available employees, enthusiastic media coverage, and more community involvement. The strategy is working. Since A Great American Brand took the reigns and the time of A&Ws’ 100-year birthday U.S. same-store sales of stand-alone A&Ws increased more than 38%. New orange and brown A&W buildings are starting to pop-up again.

One-hundred years is a long time. A&W surely had an amazing centennial birthday party. We know where they got the food. They have had exciting highs and demoralizing lows. With some tweaking, the future is looking good. One never knows, but I wouldn’t be surprised if A&W is celebrating their bicentennial birthday on June 20, 3019. I hope they are.