A FRIENDLY VISIT WITH THE AZTEC EMPEROR

On November 8, 1819 Hernan Cortes de Monroy y Pizzaro Altamirano (Hernan Cortes), conquistador from Medellin, Spain arrived in Tenochtitlan (Mexico City) with 600 soldiers, fifteen horsemen, fifteen cannons and about 1,000 Tlaxcalteca warriors. They were received warmly, but with caution, by Moctezuma II, emperor of  the Aztec Empire. As a show of hospitality, Cortes was offered Xocolatl, an exotic, cold beverage made from ground, roasted cocoa beans mixed with water and spices, often hot peppers. The Aztecs valued Xocolatl for its nutritional, medicinal, and even magical properties. They offered it to sacrifice victims to raise their spirits before the big event. To the best of my knowledge, Cortes was one of the first if not the first, European to enjoy this “chocolate ” drink. He must have been impressed!

In 1528, after conquering the Aztec Empire, being appointed governor, captain general and chief justice of “New Spain of the Ocean Sea” (Mexico), Cortes returned to Spain with a shipload of treasure including cocoa beans and the tools to prepare Xocolatl. To counter its natural bitterness and satisfy refined Spanish tastes, Cortes recommended adding a little sugar. The Spaniards took it further by also trying honey, vanilla, nutmeg, cloves, allspice, and cinnamon. Its many varieties were a hit with the Royal Court and slowly started to be noticed and appreciated by the Spanish nobility. Cortes may have had an ulterior motive in providing free samples as he owned a cocoa plantation in Mexico.

In 1615, Anna of Austria, a child of Madrid, married King Louis XIII, and introduced the chocolate drink to the French Court. France shared Spain’s fascination with the beverage, setting an example for ambitious aristocrats throughout Europe. In 1697, Heinrich Escher, the mayor of Zurich, while visiting Brussels, was deeply impressed with this “New World Delicacy,” returning home with samples and raving about its potential. Over the next century Europe would be captivated by the possibilities of the cocoa bean, slowly developing and marketing the chocolate products we enjoy today, much of that accomplished in Switzerland.

In 1819, Francois-Louis Cailler, after learning the art of chocolate making from Caffarel in Turin, Italy, opened the world’s first mechanized chocolate factory in Corsier. It is still in operation today representing the oldest brand of chocolate in Switzerland.

In 1825, Philippe Suchard opened a candy store in Neuchatel followed in 1826 by a chocolate factory in Serrieres, where he raised manufacturing standards and lowered prices. By 1833 Suchard was the largest chocolate company in Switzerland, producing half of the nation’s total production, employing approximately 250 people. 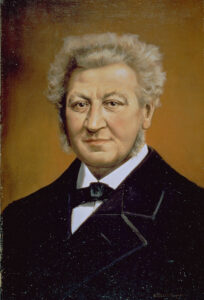 In 1836, David Sprungli-Schwarz and his son Rudolf Sprungli-Ammann started  Sprungli & Sohn, taking possession of a small confectioner’s shop in Zurich’s Marktgasse. In 1845, that shop also became a small factory, producing an Italian chocolate recipe in solid form that Zurich’s upper crust warmly embraced, creating demand problems with Sprungli’s limited space and manual manufacturing processes. In 1847, they moved their manufacturing operation from the cramped shop in the Marktgasse to a larger, mechanized factory in Horgen, located on the upper end of Lake Zurich, providing access to abundant water, employing ten workers. In 1859, they opened a second, larger and more elegant, shop in Zurich’s Paradeplatz.

With David’s passing in 1862 and Rudolf’s retirement in 1892, the business was divided between Rudolf’s two sons; David Robert, the younger, received the confectionaries in Marktgasse and Paradeplatz. Johann Rudolf Sprungli-Schifferli, the older, received the factory in Horgen. Johann was an ambitious man. In 1898, to fund his ambition, Johann converted his private company into the public company, Chocolat Sprungli AG. In continuing moves to accomodate business growth and new manufacturing technologies, Johann moved his manufacturing facility from Horgen to Werdmuhle and, finally, to Kilchberg where he purchased a lot and built a custom facility.

In 1875, after eight years of experimenting, Daniel Peter of Peter-Cailler et Compagnie in Vevey invented milk chocolate. The challenge was to avoid spoilage when adding milk to chocolate . Peter solved this problem by creating the process of mixing powdered milk (invented by his neighbor Henri Nestle) with the cocoa paste, providing additional health benefits and a smoother, creamier product. In 1887, Peter-Cailler introduced the world’s first commercially sold milk chocolate with the Chocolat au lait Gala Peter (Gala Peter Chocolate Bar), revolutionizing  the world-wide chocolate industry. Milk was the only primary ingredient sourced in Switzerland. 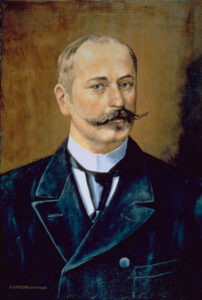 In 1879, Rudolf Lindt purchased two fire-damaged factories in Berne, including their outdated equipment, to manufacture chocolate. Lindt was frustrated with the chocolate currently in the market, including his. It was too bitter, rough, and dense-needing to be pressed by hand to fit into the moulds. As fate would have it, one Friday evening, frustrated that he couldn’t solve his quality issues, he locked the door, said goodbye to his problems and went home. When he arrived back in the factory Monday morning, he realized, in his frustrated state of mind, he had neglected to turn off his conching machines (a lengthwise stirring device). He also realized the chocolate in those machines was the finest chocolate he had ever seen or tasted. The longer stirring time removed the bitter taste, provided a resilient, silky-smooth product that would “melt in one’s mouth,” and could easily be poured into the moulds. This pharmacist’s son, with a knack for experimentation, unwittingly created a process, which he would refine, to produce the world’s finest “melting chocolate,” reinforcing Switzerland’s position as a world leader in the chocolate industry.

In 1884, Alexis Sechaud started his company in Montreux. In 1913, Jules Sechaud invented a machine process to fill hollow chocolate shells with other confections.

In 1899, Jean Tobler opened Farbique de Chocolat de Berne, Tobler & Cie in Berne. In 1908,  his son Theodor developed the triangular Toblerone, the shape inspired by the Matterhorn, made from milk chocolate and honey almond nougat, considered the best-known of the Swiss Chocolates. 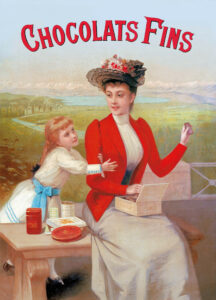 In 1899, Johann Rudolf Sprungli-Schifferli of Chocolat Sprunglit AG acquired Rudolf Lindt’s factory, the secret of conching, a secret process to add cocoa butter into the chocolate, and the marketing rights to the Lindt name for 1.5 million Gold Francs. Rudolph then changed the name of his company to Aktiengesellschaft Vereinigte Berne und Zurcher Chocoladefabriden Lindt & Sprungli (Lindt & Sprungli).

The 20th Century opened with a flourish for the Swiss chocolate industry. Between 1888 and 1910 the number of chocolate manufacturers increased from thirteen to twenty-three and the workforce from 528 to 5,547. Output increased from 13,000 tons in 1905 to 40,000 tons in 1918. With a small domestic market, seventy-five percent of this output was exported. In 1912, Swiss chocolate manufacturers accounted for fifty-five percent of the world chocolate export market. Lindt & Sprungli was leading the charge. By 1915 they were exporting to twenty nations across the globe. They opened their first subsidiary in Berlin in 1928 followed by a subsidiary in England in 1932.

That prosperity and global expansion ended with the onslaught of the Great Depression (1929 – 1941) and the Second World War (1939 – 1945). The industry, including Lindt & Sprungli, went from prosperity and global expansion to struggle and fighting for survival. Fortunately, the boom times reappeared like flowers in the Spring when the War ended. Now the problem was keeping up with demand and fighting off pesky competitors. Lindt & Sprungli re-entered the global market, signing licensing agreements with Italy in 1947, Germany in 1950, and France in 1954. They also expanded in Switzerland, acquiring Chocolat Grison in Chur in 1961 and Nahrmitted AG in Olten and Gubor Schokoladefabrik in Langenthal in 1971.

A new subsidiary was established in Spain in 1981. Lindt & Sprungli (USA), Inc., originally founded in New York in 1925, was resurrected and moved to Stratham, New Hampshire in 1986. Expansion continued in the 1990s and beyond with subsidiaries established in Poland, Canada, Austria and Australia. Lindt & Sprungli acquired Hofbauer in Vienna, Austria in 1994, Caffarel in Torino, Italy in 1997, and the Ghirardelli Chocolate Company in San Francisco in 1998.

The humble cocoa bean made an improbable journey. It traveled from the palace of an Aztec emperor in Mexico to the royal courts in Spain and France to gifted entrepreneurs in Switzerland. Those entrepreneurs overcame the obstacles of working in a small, land locked country, sourcing most of their primary ingredients from faraway lands. They developed successful companies and positioned Switzerland as a world leader in the innovation, production, and marketing of premium chocolate products. Job well done Cailler, Suchard, Peter, Sechaud, Tobler, and especially, Mr. Lindt and Mr. Sprungli.