In a previous blog titled, Chocolate’s Improbable Journey, I wrote, “The humble cocoa bean made an improbable journey. It traveled from the palace of an Aztec emperor in Mexico to the royal courts in Spain and France to gifted entrepreneurs in Switzerland. Those entrepreneurs overcame the obstacles of working in a small, land locked country, sourcing most of their primary ingredients from faraway lands. They developed successful companies and positioned Switzerland as a world leader in the innovation, production and marketing of premium chocolate products.”

Chocolate’s improbable journey took another step forward on September 13, 2020 when Lindt & Sprungli, after thirty-six months of construction, opened the Lindt Home of Chocolate in Kilchberg, Switzerland, a six-mile trek south of Zurich.  Although not the world’s first chocolate themed tourism attraction, others include the Museo del Chocolate in Barcelona; the Belgian Chocolate Village in Koekelberg; Cadbury World in Birmingham, United Kingdom; and Hersheypark in Hershey, Pennsylvania USA; it may be the most ambitious. The project was financed by the Lindt Chocolate Competence Foundation, created in 2013. 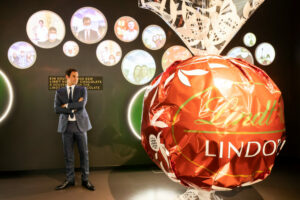 The Foundation’s objectives are to “Safeguard Switzerland’s position as a business location for chocolate over the long term; Further strengthen Swiss chocolate-making expertise; Foster industry-specific further training for specialists; Provide a chocolate museum for the general public as an interactive platform with a focus on all aspects of the chocolate-making industry; Promote innovation and science by collaborating with research institutions like ZHAW [Zurich University of Applied Sciences located in Winterthur, Switzerland] in cocoa-growing regions such as Ecuador.” 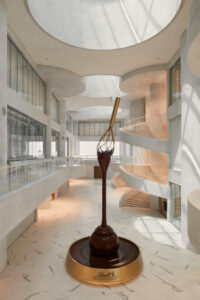 The focal point is an expansive atrium 210 feet long, 50 feet high and 43 feet wide centered by a 30-foot-high golden fountain designed as a whisk, magically suspended in the air, pouring 400 gallons of recirculating chocolate into a Lindt chocolate shell centered in a golden bowl on the floor. The three-ton chocolate fountain contains 309 feet of enclosed pipes pumping chocolate at 2.2 pounds per second. The Lindt Chocolate Competence Foundation planned a facility that would accommodate a minimum of 350,000 visitors worldwide annually. 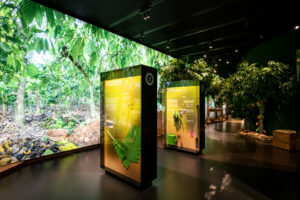 The Chocolate Discovery Tour is the heart and soul of the Lindt Home of Chocolate. With imagination and creative application, the Tour, occupying 16,000 square feet, begins with Cocoa Cultivation, visiting a Lindt cocoa (the primary ingredient of chocolate) plantation in Ghana, Africa. Moving to History of Chocolate, the visitor goes backwards in time to Mesoamerica, where the Aztecs enjoyed a primitive drink called Xocolatl made from ground, roasted cocoa beans mixed with water, spices and, often, hot peppers. Moctezuma II made the mistake of introducing the drink to Spanish conquistador Hernan Cortes, who was so taken with the beverage that he decided to conquer the Aztecs, steal the recipe, plant a cocoa plantation in New Spain (Mexico) and market the benefits of this new “chocolate” drink to the royalty of  Europe.

The next stop, Swiss Chocolate Pioneers, tells the story of such entrepreneurs as Francois-Louis Cailler, Philippe Suchard, Johann Rudolf Sprungli-Schifferli, Daniel Peter, Rudolf Lindt, Alexis Sechaud, and Jean Tobler who transformed a cottage industry into a world leader of premium chocolate products. The final step in the Chocolate Tour is Chocolate Production, where the manufacturing of chocolate products travels from the cocoa bean grown in a faraway tropical country, to processing cocoa liquor, liquid chocolate, and finally finished chocolate bars and pralines wrapped in glittery paper and shipped around the world. Scattered throughout are a number of tasting stations where Lindt products are freely sampled by one and all. 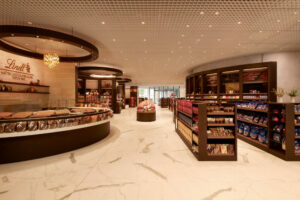 Now that the visitor has become a “chocolate expert” and had their chocolate taste buds sufficiently teased, it is time to visit the Lindt Chocolate Shop. This 5,400 square foot facility is the largest Lindt Chocolate Shop in the world. It is wonderful in its layout and delectable in its Lindt product offerings and chocolate gift ideas. Here the customer can create their own personal chocolate bar, with the assistance of a Lindt Master Chocolatier, and design their own personal chocolate bar packaging, providing a unique souvenir to impress friends and family back home. 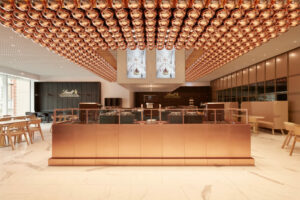 At this point, the visitor to the Lindt Home of Chocolate has surpassed the experience and knowledge of the pedestrian chocolate eater. It is time to celebrate! Where better than the Lindt Cafe? Located opposite the chocolate fountain in the atrium, this marvelously designed sanctuary is an amazing place to reflect on the day’s activities while enjoying a comfortable chair and sipping on steaming hot chocolate in a ChocoChino cup, with a shot of Noir cocoa cream, orange liqueur and, to give it a little kick to wake up those slumbering feet, a sprinkle or two of chili peppers. You can satisfy your hunger with such culinary delights as salad bowls, a variety of toasted sandwiches, ice cream cones, fruit covered waffles with powdered sugar and drips of chocolate syrup, Middle Eastern humus, a wide selection of cheese, a number of seasonal offerings, and even a glass, or two, of wine. 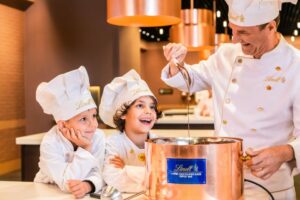 Although the Lindt Home of Chocolate is considered the largest chocolate attraction, and some would say the best, it is not the only tourism site promoting the world of  Swiss chocolate. Others include: the Cailler Chocolate Factory in Broc; the Verkehrshaus Swiss Chocolate Adventure in Lucerne; the Laderach Chocolate Factory in Bilten; the Alimentarium Museum of Nutrition in Vevey; and Schokoland in Caslano. The beauty of the Lindt Home of Chocolate, and the others mentioned above, is that in promoting their brands to tourists from around the world they are also promoting the Swiss Chocolate brand, helping the entire industry.

The next stop on chocolate’s improbable journey may well be at the Zurich University of Applied Sciences where smart people are experimenting with growing chocolate in a laboratory. Well-nourished cocoa cell cultures are cultivated into a biomass that is dried and roasted. Cocoa butter, sugar, and lecithin are added to produce a 70% dark chocolate. The $130 billion dollar chocolate market is growing. Available land and labor are becoming issues. Lab grown chocolate might be the answer, but it is very expensive at $22 for 100 grams compared to $2.90 for traditional chocolate. Cost and quality issues could be addressed with time and mass production. The bigger problem will be perception. Even with all of its flaws there is a certain romance in eating a chocolate bar whose primary ingredient was grown on a plantation in exotic places like Ghana, Ecuador, Cameroon, Brazil or Peru.

But don’t underestimate the Swiss, especially when it comes to chocolate’s improbable journey. The day may come when chocolate formulated in a laboratory in Winterthur and produced in a factory in Kilchberg will capture the allegiance of mind, soul, and pocketbook.

“A Man’s Heart Plans His Way, But the Lord Directs His Steps.”