All he wanted to be was a farmer.

Farming had captured his imagination since he was a young lad. When classmates were playing baseball or hunting varmints in nearby pastures, Walter Knott was cultivating vacant lots around his home in Pomona, California. He was doing his share to support his widowed mother and younger brother. He graduated, not from Pomona High School, but from vacant lot farming to the “real thing.” In 1909, after earning a little money as a farmhand in the Imperial Valley the previous year, Walter and his cousin Frank Comer leased twenty acres of promising farm land in the Coachella Valley.

With a soft economy and the challenges of a start-up business, Frank was forced to find employment elsewhere. Walter was left on his own to plant, harvest, pack, sell and deliver, although he did get some help from local Indian laborers. Walter avoided the usual means of  marketing…broker, distributor, large grocers…selling directly to small grocers, who appreciated the abundant variety of produce, competitive prices, and excellent service. At the end of the season, Walter realized a profit, which he shared with his cousin Frank, and returned to Pomona with five hundred dollars warming his pockets and fueling his ambition. 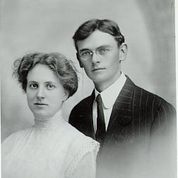 Back in Pomona, Walter was hired by a local masonry company, eventually becoming the company bookkeeper and finally a construction foreman. Showing a frugality that served him well throughout his life, he saved his money, purchased a lot and built a house. Life was good for the twenty-one-year-old Walter Knott except for one integral void in Walter’s life. That void was filled when Walter convinced his high school sweetheart Cordelia Hornaday that her life would be fuller as Cornelia Knott. The matrimonial “knott” was tied on Saturday, June 3, 1911, creating one of the most successful husband-wife teams in American business history.

On January 26, 1913 Walter and Cordelia had their first child, Virginia. Life was good; a secure job with a good salary, a brand-new home, marriage to his high school sweetheart and a beautiful baby daughter. But he wanted to be a farmer, not a masonry construction foreman. He and his family were still young enough to follow a dream. In 1914, when the fields of Europe would soon be turned into the bloody trenches of World War I, Cordelia acquiesced to Walter’s argument of short-term struggle for long-term prosperity. It is doubtful she was totally convinced, especially when she found out they would be farming a 160-acre homestead in the Mojave Desert, twenty-five miles east of Barstow! Walter was confident he could make it work. He was successful in the desert of the Coachella Valley. Why not the Mojave Desert?

Walter and Cordelia sold their house, a sacrifice far greater for Cordelia than Walter, purchased farming supplies and headed to one of the hottest, driest and most forbidding locations in the world. There was a house on the property. It had little resemblance to the house they left behind in beautiful, garden-like Pomona. They now occupied a small, primitive two-room adobe building serviced by an out-house and little else. Their lawn was blowing sand. Their trees were sagebrush and cacti. The previous owner failed to occupy the land for three years, the required time to qualify for ownership. Not surprisingly water was an issue. There was water, but it was buried in aquifers deep under the desert sand.

Walter’s primary well consistently failed and filled with sand. He eventually resorted to the house well, functioning, but too limited for a 160-acre farm. They couldn’t afford to build a proper well. They needed to grow and sell a crop to survive, difficult without a reliable water supply. Walter’s dream was crumbling like the walls of his well. Walter and Cordelia had grit. What they didn’t have was money.

Money finally came when Walter was hired to build new buildings in a dead mining town, approximately twenty-six miles southeast of their farm. Calico, California held a special place in Walter’s family history. His maternal uncle, John King, while sheriff of San Bernardino County, was the primary investor in the Silver King Mine in Calico, one of the most successful silver mines in California mining history. Ironically, in 1951 Walter Knott would purchase the Calico Ghost Town from the Zenda Mining Company for $15,000 and turn it into one of the most successful tourist attractions in San Bernardino County. In 1916 the silver was long gone except for tailings from the abandoned mines, that sparkled just enough to excite naïve investors and unscrupulous promoters. Walter soon learned that he was working for the latter. His conscience weighed heavier than his poverty and he quit. Fortunately, he found employment with San Bernardino County, working on a road crew building a highway that would become famous as Route 66. The Knotts finally met the residency requirements for their homestead. They now owned 160 acres of the Mojave Desert. The farm may not have been productive, but the Knotts were. On January 10, 1916 Russell was born and on January 25, 1917 Rachel arrived. 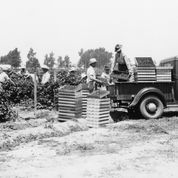 After three years sharecropping on a cattle ranch on the central California coast another cousin,  Jim Preston, offered him a partnership growing berries in a little farming town in Orange County named Buena Park, twenty miles south of Los Angeles. The cousins negotiated a five-year lease with a two-year option for twenty acres of  land at $1,000 a year. Walter purchased berry vines and necessary equipment. It was 1920, considered the birth of  Knott’s Berry Farm. The Roaring Twenties were little more than a muted purr for Walter and Jim, although Walter and Cordelia were blessed with their last child, daughter Marion on April 22, 1922. Bad weather spelled bad crops. Even when the weather was good, prices were bad. Walter reflected back to his success in the Coachella Valley and started selling directly to area grocery stores, bypassing the brokers and distributors, keeping his prices low while maintaining an acceptable profit. 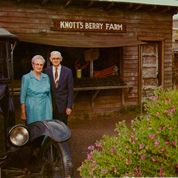 Walter and Cordelia at the Original Berry Stand, Courtesy of Knott’s Berry Farm

Walter eventually took this marketing model one step farther and started selling directly to consumers from a simple, but functional, roadside stand on well-traveled Highway 39, the main thoroughfare between Los Angeles County and the Orange County Pacific beaches. With cash flow now on the positive side of the ledger, the two cousins started a catalog business selling berry root stock to other growers. This was the forerunner of the Knott’s Berry Farm internationally popular gift catalog business featuring such yummy treats as fruit preserves, jams, jellies, syrups, salad dressings, pickles, and steak sauce.

In 1927 Cousin Jim left the partnership. Walter didn’t skip a beat. He purchased ten of the twenty acres he had been leasing. With the financial “Crash of 1929,” Walter bought ten more acres at dirt cheap prices. He now owned  twenty acres of real estate in what would become some of the most valuable land in Southern California. Walter was successfully growing and marketing blackberries, dewberries, loganberries, youngberries, and strawberries. But Walter knew that to hit the big time in the berry business, he needed something new and unique. In 1932 Providence came knocking in the form of George Darrow with the United States Department of Agriculture. Darrow was looking for a man named Boysen who supposedly had created a superior hybrid berry. He hoped Walter could help him. Walter tracked down Rudolph “Rudy” Boysen, who was currently the Superintendent of Parks for Anaheim. Boysen confirmed that he was their man. He had successfully crossed a blackberry, loganberry, and a red raspberry, creating a rather large and delicious new berry. Unfortunately, after seriously being injured in an automobile accident, he gave up the project to focus on recovery and his career. There was a remnant of his project left, a few withered vines, abandoned in an orange orchard previously owned by Boysen’s relatives. 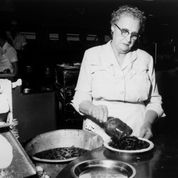 A year later, transplanted to Walter’s farm and with Walter’s loving care, the vines produced a small crop. Walter appropriately named the new fruit the boysenberry. He now had the product he needed to separate him from the competition. The boysenberry has become synonymous with Knott’s Berry Farm. Nineteen-thirty-two was also the year that Walter and Cordelia entered the hospitality business, opening a small tea room containing five tables serving a variety of beverages, sandwiches and hot biscuits with butter and home-made berry jam to partner with their quickly-becoming-famous boysenberry pie. In 1934 Cordelia expanded her menu to include fried chicken dinners. Although she fought it tooth-n-nail, Cordelia and Walter were now in the restaurant business. On their first day, June 13, 1934, Mrs. Knott’s Chicken Dinner Restaurant served eight dinners on Cordelia’s wedding china for the “Depression Era” price of sixty-five cents each. The chicken dinners then were similar to the chicken dinners served today: country-fried chicken; cherry rhubarb appetizer or chicken noodle soup; tossed green salad; mashed potatoes and gravy; kernel corn or cabbage with ham; all-you-can-eat buttermilk biscuits with butter and preserves; and, to finish it all off, boysenberry pie, apple pie or boysenberry sherbet. The chicken dinners were an instant hit. The restaurant’s growth was phenomenal. From those original eight dinners served in 1934 sales grew to 425, 217 dinners in 1940, 776, 333 in 1945, 1, 145, 577 in 1950 with continued growth in the following years. Mrs. Knott’s Chicken Dinner Restaurant became, “the world’s largest, full service, single location chicken restaurant in the world with seating for one thousand in eight separate dinning rooms.” Such incredible growth created an incredible problem. 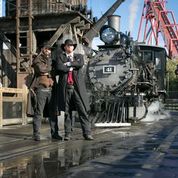 The lines of people waiting for service easily stretched for blocks, the waiting time was up to three hours. Something needed to be done to keep these people happily waiting in the hot Southern California sun for their chicken dinners. Providence knocked again, this time creating a crisis which birthed an opportunity. Walter entered the entertainment business. He built a wishing well, rock gardens, a replica of George Washington’s Mount Vernon fireplace, and a twelve-foot-tall, functioning volcano. In 1940 Walter tapped into his passion for the American Wild West, moving the Gold Trails Hotel in Prescott, Arizona, originally built in 1868, piece by precious piece to the Farm.  Those pieces of yesterday were the start of what became the world-famous Knott’s Berry Farm Ghost Town, marketed as America’s  first “themed” amusement park. Their small twenty-acre berry farm would eventually be 200 acres of restaurants, shops and theme park attractions, welcoming over four million visitors a year.

Time passed and so did Cordelia on April 23, 1974 of breast cancer at age eighty-four and Walter on December 3, 1981 of Parkinson’s Disease at age ninety-one. With Walter’s passing the company was in the hands of the children; Russell, Marion, Virginia, and Rachel. In 1991 the company expanded their processed food line with the acquisition of Peggy Jane’s Salad Dressing and a new restaurant division opened Mrs. Knott’s Restaurant and Bakery locations in Irvine and Moreno Valley. In 1992 they opened a third restaurant in Mission Viejo. All the restaurants were in Southern California. In 1995 the family sold the processed food division to ConAgra Brands who, in 2008, sold it to the J.M. Smucker Company. In 1997 the children of Walter and Cordelia sold Knott’s Berry Farm to Cedar Fair Entertainment Company a publicly traded partnership located in Sandusky, Ohio, who still own and operate it.

All he wanted to be was a farmer. With Cordelia by his side this humble farmer, with a simple faith in God, followed a path far wider than anything his mere mortal mind could imagine.

“A man’s heart plans his way,

But the Lord directs his steps.”