A Southern California entrepreneur took a struggling chain of convenience stores and transformed it into one of the most iconic, might I say rebellious, brands in the grocery business – Trader Joe’s.

Joseph Hardin Coulombe (pronounced coo-lomb) was born on June 3, 1930 in San Diego, California. Although easy to imagine Coulombe as a crazy hippy captured in a never-ending journey of self-realization, it is quite the contrary. His education and early career marked him as an intelligent, hard-working man with mainstream business ambitions. He graduated from Stanford University with a degree in Economics in 1952 and an MBA from the Stanford Graduate School of Business in 1964. Coulombe presented a business plan to some of his professors. It was a unique concept in the food retailing business. The plan’s premise was to develop a chain a retail gourmet food stores, based on purchasing in bulk, repackaging in smaller containers and retailing at moderate prices to well-educated, middle-income consumers. The professors turned the  idea down. This is why professors teach and entrepreneurs get rich.

After graduate school Coulombe went to work for the Rexall Drug Company. In 1958 Rexall, impressed with the 7-Eleven convenience store success, assigned Coulombe the task of launching a chain of competing Pronto Markets in greater Pasadena, California. After six stores and marginal success, Rexall ordered Coulombe to close them down. Joseph Coulombe had a better idea. He would buy them! He would be his own man, create his own company, develop his own retail empire. By the late 1960’s he had become disenchanted with the undifferentiated, multi-category convenience store model. Then he read a book that changed his world.

White Shadows in the South Seas was a 1919 travel book written by Frederick O’Brien. O’Brien wrote the book in 1913 – 1914 while living among the natives on Hiva Oa, the second largest of the French Polynesian Marquesas Islands. It took him five years before Garden City Publishing (New York, New York) agreed to publish the book. Good decision. It was a bestseller. In 1928 Cosmopolitan Productions produced and Metro-Goldwyn-Mayer distributed a move based on the book with the same title. Although not quite a “talking film,” it was the first MGM film to be released with a prerecorded soundtrack of special effects and music. Filmed on location in Papeete, Tahiti, a location rarity for the time, the film received an Academy Award for Best Cinematography. It also received a handsome profit. Produced for $365,000, it generated worldwide income of $1.6 million. 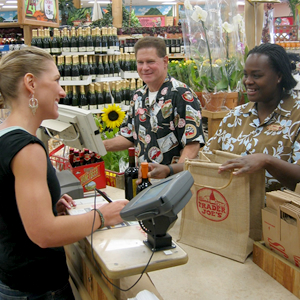 The South Pacific theme captured Coulombe’s imagination and focused his ambition. Tropical sunsets, beautiful native girls, whalers, missionaries, sea captains and traders. In 1954 he had his business plan. Now, thanks to Frederick O’Brien, he had his inspiration. “Ahoy, me hearties, trim the sails, let the adventure begin.” Thus cedar planked walls, Hawaiian shirts, plastic lobsters, a nautical theme where store managers became Captains and workers became Mates and the theme of sailing the world in search of exotic, culinary delights at affordable prices was born. The Pronto Markets became Trader Joe’s.

Beyond whimsical store decorating and naval titles, Coulombe realized that demographics were changing. More people were going to college, getting jobs and traveling the world. They were tasting foreign foods and frustrated when they couldn’t find them back home, at least at reasonable prices. Purchasing in bulk, close-outs and overstocks, small stores in lower rent strip centers, limited inventory, buying direct and eliminating national brands kept his costs and selling prices down. The wide assortment of products and brands from around the world, many unknown, provided a fun, treasure-hunt-like experience. Coulombe’s stores were the antithesis of the traditional grocery store. They were a shelter in the storm of massive sameness. They provided a theme park like experience without the park, an escape from the known, a mental adventure to the romantic unknown. Locating his first stores in booming Southern California didn’t hurt. 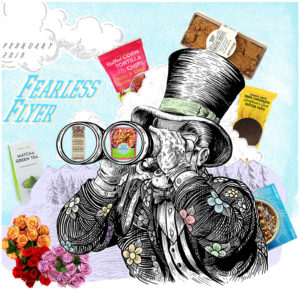 Unlike traditional grocery stores, Trader Joe’s spends little on conventional advertising. Its primary vehicle is a fun, creatively written newspaper named the Fearless Flyer. It is, appropriately enough, printed on newsprint featuring an assortment of product stories and culinary advice. It can be picked up in the stores or received through the mail. It has become a classic in itself. Unlike traditional grocery inserts the Fearless Flyer is copy heavy, photographs replaced with illustrations and clip-art, black and white with a touch of color. An example in the Nov. 2017 Edition of a product story reads as follows:

“Mini Marshmallows – The holiday version of our Marshmallows may be Mini but these sweet, pillow-y puffs are BIG on appeal, whether you are making that classic Sweet Potato Casserole for the Turkey Day meal (recipe on the package) or satisfying mini-humans with homemade, TJ’s Crisp Rice Cereal treats. No doubt, marshmallows are an indulgence, but it’s good to know that our Marshmallows, crafted with natural vanilla flavor, contain no artificial flavors or preservatives. And, they’re not only vegan, but also gluten free! Moreover, each ten-ounce bag is $2.99 – a value worthy of  marshmallow-laden, hot-cocoa toast…Cheers!”

In 1976 Joe Coulombe was approached by the German mega food retailer Aldi Nord interested in purchasing the 23-store chain. They were attracted by Trader Joe’s niche creation and domination, their die-hard customer base, profitability and similar frugal business philosophies. A deal was reached in 1979. Coulombe worked for Aldi until he couldn’t. In 1988, with 26 stores (today there are over 500) and $145 million in sales, the namesake of the company retired. Brilliant, successful entrepreneurs rarely make happy employees.

Albrecht Diskont (Aldi) was started shortly after World War II by Theodor Paul “Theo” Albrecht, born on March 28, 1922 and his older brother Karl in Essen, Germany. The brothers took over a small grocery store their mother had started in 1913. Within a decade the Albrecht’s grew their no frills, low prices concept to more than 100 stores. The company eventually became one of Europe’s largest supermarket chains promising, “The best quality at the lowest price.” In 1960 the brothers had a spat regarding selling cigarettes. The issue was so hotly contested they agreed to split the business into two separate companies. Theo’s empire became Aldi Nord (which continued to sell cigarettes and headquartered in Essen) covering northern Germany and Karl’s Aldi Süd (which discontinued selling cigarettes and was headquartered in Mulheim) covering southern Germany.

Dividing up the world was not as simple. The brothers agreed that Theo’s empire would expand into the balance of Europe and the United States with Trader Joe’s while Karl’s would expand into Great Britain, Australia and the United States with Aldi’s. When Theo died on July 24, 2010 his net worth was $16.7 billion making him Germany’s second richest man. The richest man was his brother Karl at $23.5 billion. 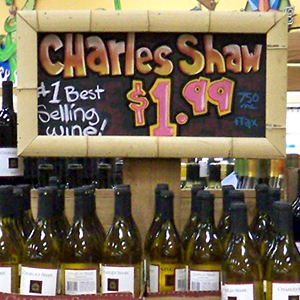 In 2002 Trader Joe’s introduced one of its most endearing and successful product launches. Known for its wide selection of wines, the Charles Shaw label, commonly known as “Two Buck Chuck” for its unheard of $1.99 price, shook the wine industry to its core. It all started with Charles F. Shaw, an investment banker and graduate of the United States Military Academy and the Stanford School of Business. Pursuing his dream of bringing French wine to America, Shaw and his wife Lucy purchased a Napa Valley winery in 1974. Shaw married well. Lucy came from a prominent rice growing family, inheriting a large amount of money. This and bank loans financed the purchase. In 1979 they produced their first Gamay, a type of Beaujolais. Their product won a number of gold medals and was featured at three White House state dinners. Things were looking good.

Unfortunately for Shaw his unique varietal couldn’t compete with the better known and popular Cabernet. Even though Shaw expanded his selection to include Chardonnay and Pinot Noir the die was cast. Fate had it in for Charles F. Shaw. An irresponsible supplier accidentally polluted a shipment of wine, the pesky root louse destroyed his main vineyard and peskier bankers demanded payment on past due loans. To cap it off Lucy, having invested $450,000 of her inheritance with little or no return, wanted a divorce. In 1991 Lucy got more than a divorce, she also got the winery and eventually an appointment in bankruptcy court.

In 1995 the winery was sold to Fred Franzia, CEO of the Bronco Wine Company, Ceres, California for $18,000. Not a bad deal with Charles Shaw wines recording $150 million in sales by 2003. Not your ordinary business deal, but then Fred Franzia is not your ordinary wine merchant. Franzia, nephew of wine titan Ernest Gallo, started the Bronco Wine Company in 1973. Unlike Mr. Shaw, fate was his friend. Today the Bronco Wine Company is the fourth largest wine producer in the United States. They own over 45,000 acres of vineyards, sell 20 million cases annually, have their own distribution company (Classic Wines of California) and market 250 brands.

Joe Coulombe didn’t break the mold. He created a new mold. He started with what he had, small convenience stores in marginal locations with limited parking and a tired concept. He wanted to create something unique in the food and beverage industry. It had to reflect the inner Joe, the White Shadows in the South Seas Joe. He believed others were seeking the same culinary adventure. He wasn’t looking for a niche in the market he could compete in. He wanted to create a niche he could dominate. And he did. Joe Coulombe was successful because Trader Joe was The Ultimate Rebel.