It was a hot summer day. In Las Vegas the summer days are always hot. The crowds didn’t help. They were a robotic mass, decked out in shorts, t-shirts with clever sayings and weary eyes that reflected an evening of incredible fun, regrettable actions or misplaced fortune. They moved like lemmings headed for the proverbial cliff, stopped and started by colored lights. The cliff never arrives, but the doors do. Glass, revolving doors, easily rotating from the desert sun into the artificial light, the artificial world of Las Vegas casinos. The casinos are a dizzying array of rock ‘n roll music, flashing bright lights, scantily clad waitresses, smokers enjoying a puff between coughs and the sounds of laughter, disappointment an victory competing with each other for attention.

I’m a Las Vegas wanderer. I never stay in one place long. I wonder from this casino to that casino, the ice cream stand over here, the cool restaurant over there, the souvenir shop that can’t be passed – might find something for the wife, probably not. I like to visit the exclusive retail stores, teasing the clerks with a potential sale. I like to search the nooks and crannies along the Strip for an original concept, the product of a fertile mind and a Harold Hill personality, something that breaks new ground while not breaking the bank, something that captures the mind and heart and, eventually, the pocketbook. I like a concept that transforms a product into pixie dust and rainbows, smiling faces and childish laughter. Between the glitter and glamour, the pretend and the real. I found it.

M & M’s World, an oasis of inspiration and fun seems out-of-place in Las Vegas while at the same time couldn’t be more natural. The store proudly waves the multicolored brick and mortar flag of one of the world’s most successful food companies. Mars, Inc., was founded by Franklin Clarence Mars on June 23, 1911 in Tacoma, Washington. M & M’s share the confectionery spotlight with such other iconic brands as Milky Way, 3 Musketeers, Snickers, Twix, Skittles and the Mars bar. This family owned company, headquartered in McLean, Virginia has 115,000 employees worldwide and $35 billion in annual sales, ranking it as the 6th largest privately held company in the United States. The consumer’s favorite in this pantheon of brand names are the little, round, colorful, tasty morsels that promise to satisfy that deep, insatiable chocolate craving that tends to imprison the culinary soul in most of us.

Forrest, realizing an opportunity when he saw one, received a patent for his own process in 1941 and set up shop in Clinton Hill, New Jersey. With World War II moving into high gear and chocolate being rationed, Forrest had a problem sourcing the product’s primary ingredient until he convinced Bruce Murrie to purchase a 20% share of the new venture. No disrespect to Bruce, but it was access to his father, William F.R. Murrie, president of the Hershey Chocolate Company, which just happened to control the rationed chocolate, that was the key to unlock the M & M’s success story. The combination of Mars and Murrie not only provided the financial resources and access to rationed chocolate, but also the product’s name.

During the Second World War, M & M’s were sold exclusively to the military, actually included in C-rations, before being unleashed on an unsuspecting public. Nineteen fifty-four proved to be pivotal. The original black imprinted “M” was changed to white, a peanut variety was introduced and the now famous tagline, “Melts in your mouth, not in you hand” was introduced. In 1980, the company launched a worldwide attack on Planet Earth, conquering store shelves in Australia, Canada, Europe, Hong Kong, Japan, Malaysia and the United Kingdom. Creative marketing positioned and expanded the brand including the introduction of new flavors, colors and customizable merchandise. Today M & M’s are the world’s most popular confectionery brand. Possibly the most successful marketing achievement was the creation of a family of animated characters with cartoon-like storytelling powers.

The “Spokescandies,” round M & M’S characters with skinny legs anchored in oversize white shoes, hands nestled in clean, white gloves (must keep the Health Department happy), saucer eyes, silly smiles and that big, white “M” right in the middle of their chests, were introduced to television audiences in 1995. This cast of characters were the brainchild of Susan Credie, Creative Director of Batten, Barton, Durstine & Osburn (BBDO) advertising agency in New York City. Credle aimed to create a comedic ensemble with each cartoon character representing one of the M & M’S colors. Her aim was right on! The Spokescandies created unmatched brand awareness in the candy industry. Especially noted were commercials created by the legendary “King of Claymation,” William Gale Vinton, Will Vinton Studios, Portland, Oregon. Today the Spokescandies are hosting some of the most impressive examples of retailtainment, the M & M’S World retail stores. 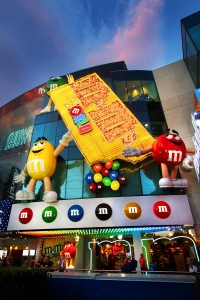 The Las Vegas store I visited was the first one, built in 1997, followed by stores in other well-known tourist destinations, Orlando (2005), New York City (2006), London (2011) and Shanghai (2014). The store was enjoyable and fascinating in concept.  It’s four stories, 28,000 square feet is located in the Showcase Mall on Las Vegas Boulevard, next to the MGM Hotel & Casino. The first floor features a gift shop displaying over 7,000 gifts and souvenirs designed exclusively for M & M’S World stores. On the second floor you will find the world’s largest candy wall at 62 feet long, displaying 125 tubes containing 22 varieties and 11 flavors of M & M’S. The highlight of the third floor is the 3D movie theater showing the classic, “I Lost My “M” in Vegas.” The fourth floor may be the best floor for grown-ups. On display is a replica of the M & M’S sponsored NASCAR #18 Toyota Camry, driven by Kyle Busch of Joe Gibbs Racing, along with appropriately branded racing merchandise. 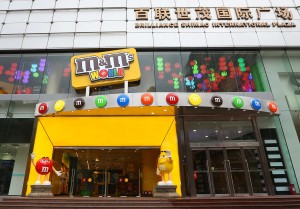 The other stores are similar formats with  a few points of distinction. The Orlando store, minutes from Walt Disney World was named the “International Store of the Year in 2005” by the Institute of Store Planners. The New York City store is the largest candy store in New York City while the London store is the largest candy store in the world at 35,000 square feet. The Shanghai store is promoted as the most technically advanced of the M & M’S World stores, offering mobile payments from any location inside the building.

Retailtainment, also known as “inspirational retailing” and “entertailing,” is defined in, “Enchanting a Disenchanted World: Revolutionizing the Means of Consumption” by author George Ritzer as, “the use of ambiance, emotion, sound and activity to get customers interested in the merchandise and in a mood to buy.” It is another tool, along with e-commerce, catalog sales, food tourism, food clusters, food trade shows and food parks to be incorporated by food and beverage processing companies to control their “sales destiny.” Mars, Inc. has mastered the concept, but, of course, they are Mars, Inc. Having said that, there is absolutely no reason most food and beverage processors cannot implement retailtainment as they have implemented other business disciplines in order to survive and prosper. It may take a helping hand, at least a friendly visit to one of the M & M’s World stores listed below. You might learn from the best, Mars, Inc., the Masters of Retailtainment!